It's Time 2 Climb! Use your unusually long limbs to climb to an unusually high peak, in H8 2: Carry Flag! (nb: h8 is intended to be pronounced as "Height", due to the umlaut)

(Controls will vary if you use the onscreen keypad)

Goal: Reach the top of the mountain. It's just over 120 height units high. There is an ending. There is no timer or points.

If you would like to see the ending again, but hate climbing, you can watch here it in gif format: https://github.com/Chromatophore/h8-2-Carry-Flag#goal

You can only extend your limbs so far. There is an indicator on your chest that shows roughly how much more extension you can achieve.

Help! If you scroll your current latch point off the screen and get stuck, use the 'cancel current limb movement' button to put it back where it was, and adjust your body.

If you can't work out where to go, or want to know how far up you are, there is a 'height_map.png' file available, which is an image file showing where all the nodes are on the cliff face.

Other: This is a spiritual? sequel to h8, a mountaineering simulator game for Octojam IV. It was a collaboration project between myself (aka Mastigophoran) and Taqueso. Unfortunately, I was too busy with work that really I only was able to offer the initial idea, and helped a little with the drawing loops. The rest of that project was all Taqueso's work, and I fondly remember the many wonderful ideas he implemented, as well as those that fell on the cutting room floor. I decided perhaps a sequel would be a good project to do for Octojam 9, and go from Superchip up to XO-Chip, and try to implement some of the ideas we'd had in our heads when we butted up against the realities of Superchip.

This project is on git hub, and can be found here: https://github.com/Chromatophore/h8-2-Carry-Flag 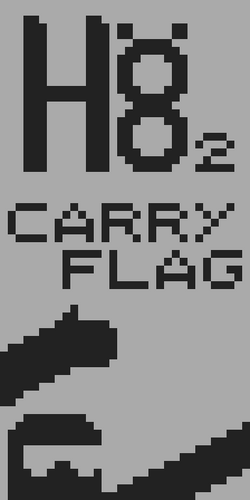